i_need_contribute
India eases COVID restrictions as infections hit 2-month low
author：ARSHAD R. ZARGARsource：CBS 2021-06-08 [Medicine]
The roads of India's sprawling capital city were choked with traffic on Monday for the first time in weeks. The lowest daily coronavirus infection numbers in two months have led the government to ease restrictions implemented in several areas as the nation grappled with a deadly second wave of the virus.

Major cities including Delhi and Mumbai allowed many businesses to reopen and police checkpoints were removed, bringing the usual throngs of traffic back onto the roads.

Traffic is seen on the road in Mumbai, India, June 7, 2021. Businesses in two of India's largest cities, New Delhi and Mumbai, were reopening as part of a phased easing of lockdown measures in several states now that the number of new coronavirus infections in the country is on a steady decline.RAFIQ MAQBOOL/AP

India reported 100,636 new COVID-19 cases and 2,427 deaths on Monday — a significant decrease from the record 414,188 cases registered on May 7. The country's total caseload has crossed 28.9 million, with 349,186 deaths, according to official government data, but many experts believe the actual numbers could be five to ten times higher.

In Delhi, stores in shopping malls and stalls at markets were permitted to reopen on an odd-even basis, taking turns to do business on alternating days depending on address numbers. Delhi's subway system and private offices were allowed to start operating again at 50% capacity.

India's financial capital Mumbai reopened its restaurants and markets, but shopping malls and movie theaters were to remain shuttered for the time being. The city has planned a 5-level lifting of restrictions, with activities being permitted to resume over several weeks.

Restrictions were also eased in the states of Uttar Pradesh and Haryana, but others, including Tamil Nadu, Karnataka and Rajasthan, extended their lockdowns at least through the weekend.

Push to ramp up vaccination

Health experts have voiced concern that lifting all restrictions too quickly could encourage a careless approach towards precautions like mask wearing and social distancing, and thus increase the risk of the virus coming back for a third wave, especially as the majority of the population still hasn't been vaccinated.

India has given more than 230 million people at least a first coronavirus vaccine dose, but with a total population of about 1.34 billion, some experts believe the pace needs to pick up if the country can hope to avoid a repeat of the record-high death rate it witnessed just a month ago.

India's hospitals were overwhelmed as the second wave peaked last month. Seriously ill patients were turned away because there were simply no more beds available. Severe shortages of medical oxygen left thousands of people waiting for hours at road-side refilling stations, and some people even died as a direct result of the lack of supplies.

In his first TV address to the nation since the second wave brought the country to its knees, India's Prime Minister Narendra Modi on Monday responded to criticism of his handling of the pandemic.

He said his government had done "whatever was possible" to resolve the crises, including the oxygen shortage, and he insisted that "India's vaccination pace is faster than most other nations."

Modi announced that free vaccination would be extended to all adults from June 21, and that the federal government would take back control of vaccination programs from the states. 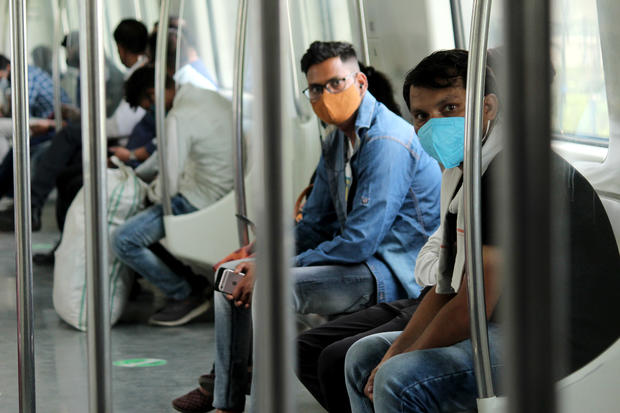 Commuters travel in a Delhi Metro train after service was permitted to resume at 50% capacity with an easing of anti-COVID-19 restrictions, in New Delhi, India, June 7, 2021.MAYANK MAKHIJA/NURPHOTO/GETTY

Under the previous policy, the central government gave free vaccines to those over the age of 45 and to frontline workers, but left state governments and private hospitals to administer doses, at a cost, to people between 18 and 44.